We had an exiting year in 2022.
April: Malawi was an experience. 60 US Dollars is the average monthly income. People walk 2 3 hours to work.
if your wealthy you own a motorbike.
June: we could not ride the cdt, as planed, because it had to much snow. So we did the amerikan thing, and drove from
area ro riding area and stayed a couple days at each place in Montana, Wyoming and Colorado.
August, the new trail was great.
Selptember: another hilight. The great divide Trail. Check the video and the blog.

2023 we are finally getting ready to build in Alaska.
And hopefully we can take some guests to the Canadian wilderness in September.

Since 2019, the VFD e.V., together with the specialist magazine "Der Kutschbock", has been awarding the "Eisernen Gustav" as a prize to promote travel culture on horseback. It is intended to honor horse lovers who, with their activities, conjure up the magic of travel, rediscover old ways, strengthen the bond between humans, animals and nature and contribute to the horse and the various riding, driving and working methods that developed around the world as a cultural asset. The prize is awarded in five different categories and, in addition to work with horses, also includes work with mules, mules and donkeys on an equal footing. The namesake With his cab ride from Berlin to Paris and back, Gustav Hartmann succeeded in 1928 in one of the most spectacular actions of his time. Together with his horse “Grasmus” he set out on the long journey in a buggy. A sign on the coach body explained his plan: "The oldest driver from Wannsee allowed himself to make the last trip Berlin - Paris with the cab 120, since the horse material is in the extinction zone." Thousands of people lined his way. The "Iron Gustav", as he was respectfully called, was concerned with international understanding as well as pointing out the increasing displacement of the horse as a loyal companion of humans. Bucking the general trend, he wanted to set a "record of slowness". He was inspired by the French Amazon Rachel Dorange, who had just ridden from Paris to Berlin.
Eiserner Gustav 2022 an Peter van der Gugten
On the top of a mountain in BC Canada, I Tina Boche handed over the award Eiserner Gustav 2022 to Peter van der Gugten in the Category Trail Riding. The Award stands as a symbol for all the mountain ranges he has climbed with his horses in the last two decades. This list of countries is long, very long. There is rarely another Rider who has crossed so many countries by horse with a tarp and sleeping bag.
Switzerland, Germany, France, Italy, Hungary, Austria, Serbia, Czech Republik, Kroatia, Serbia, Lituania, Romania, Mongolia, North Macedonia, Greece, Georgia, Spain, Kirgistan, Argentina, Chile, USA, Canada...
Peter describes himself as a late beginner and autodidact, who is addicted to the long Ride. He tells the story of climbing onto his daughter s horse, so it would not be just a pastor decoration, but return some value for the feed. What happened after that turned into a passion with a high addiction factor. Those who know him can imagine the colorful description of his first attempts at horseback riding. But he is in good company. Aime Felix Tschiffely 1922 of Switzerland, living in Argentina at the time, wrote in his book how he after being thrown off his riding horse 40 times, rode the same horse from Buenos Aires all the way to New York.
Several weeks every year Peter rides his horses in the most exciting regions of our planet. The cool airs of the mountains are his favorites, there is hardly a mountain chain he has not conquert yet.
With his GPS on his left-Hand, he walks in front of everyone, and if he feels his horse is going too slow, you can hear him calling... move...move....
Ultralight traveling is his thing, as little equipment as possible. And between the rides, he searches the web, for smaller and lighter tools, than the ones he has in his saddlebags. This year September we rode 4 weeks in the Rocky Mountains of Canada - without a packhorse, to the amazement of the outfitters, we encountered on the trail. And Peters Projects have not ended yet, the adventure continues. Tina Boche

Hoping to finaly see an end to the Covid misery, we find ourelf confronted with a war in Europe started by a dictoaror with a mindset from the 19th century. 70 years of peace, 15 years of cooperation and trying to include Russia into European comerce structures, did nothing to chase away the Russian fear of the bad imperialists, out to destroy them. While here in Western Europe Armees where scaled back and declared obsolete, because we were working together for a unified Europe including the eastern part, a Russian President is dreaming of a Expanded Russian Empire.
No matter, what the Propaganda Machines on both sides declaere, this war is jolting us back into the  20th century. One can only pray for this war to end asap. And even if i jenerally do not consider myself to be a hawk, i do see the necessety to upgrade our defenses here in Europe, to defend the western civilisations egains this kind of agression.

the good news.. there is more horses in the family
in addition to the 3 trail horses we have here in Colorado, we have now another 3 that where purchased for the Kids and Lukas in Larkspur. So now the whole family is riding horses including the 6 year old.  2022 life is coming back to normal.

Akwa, my Arabian in Switzerland, is not really gaining any weight, and i had him checked out by the vet, to see what could be the reason.
If i can get my replacement horse from Kabardia in the russian Caucasus, only heaven knows, so we will find out in May, what horse i will be riding on my trails this year.
I returned to Switzerland in March and am teaching at the Akademy. In April i will be in Malawi, living the African experience. In May i will be back again in Switzrland, giving trail riding courses and working at the Akademy for trailriding. In June i will be riding in Wyoming with two guests form Switzerland and Germany. included in this 600 ml trail starting near Helena going south passed Yellowstone and Teton National park, to the Bridger National Park in Wyoming is the last 200 mls of the Continental Divide trail, that we missed out in 2019.

In July and August i will be back taking Guests on their own horses across the alps. ther is a new Trail we are going to check out taking us up to 9000 feet in Grison, in Switzerland, its called the Cirolo Engadina. in September i will be riding the Great divide Trail in Canada starting at Grand Cache and riding south 600 mils to the border of the US in Waterton.
Our Guesthosue on the Red Rock Ranch is just about finished and the Cabin at Hartsel is getting rented out this summer. A new house will be built up there also.

Another exiting project is our new video training tool that we will start to work on, this summer, getting the info about trail riding out there to the public.

Due to Corona some of the planed Trips could not be done.
Getting wiser, i have prepared alternative Trips for 2021
One of the surprises of this year: My trusted Kabardine, can no longer be my Guide horse,
cause of a back insury.  I have found a new horse, a Arabian 11 years old, that will have
to learn to climbe and work as a guide horse. 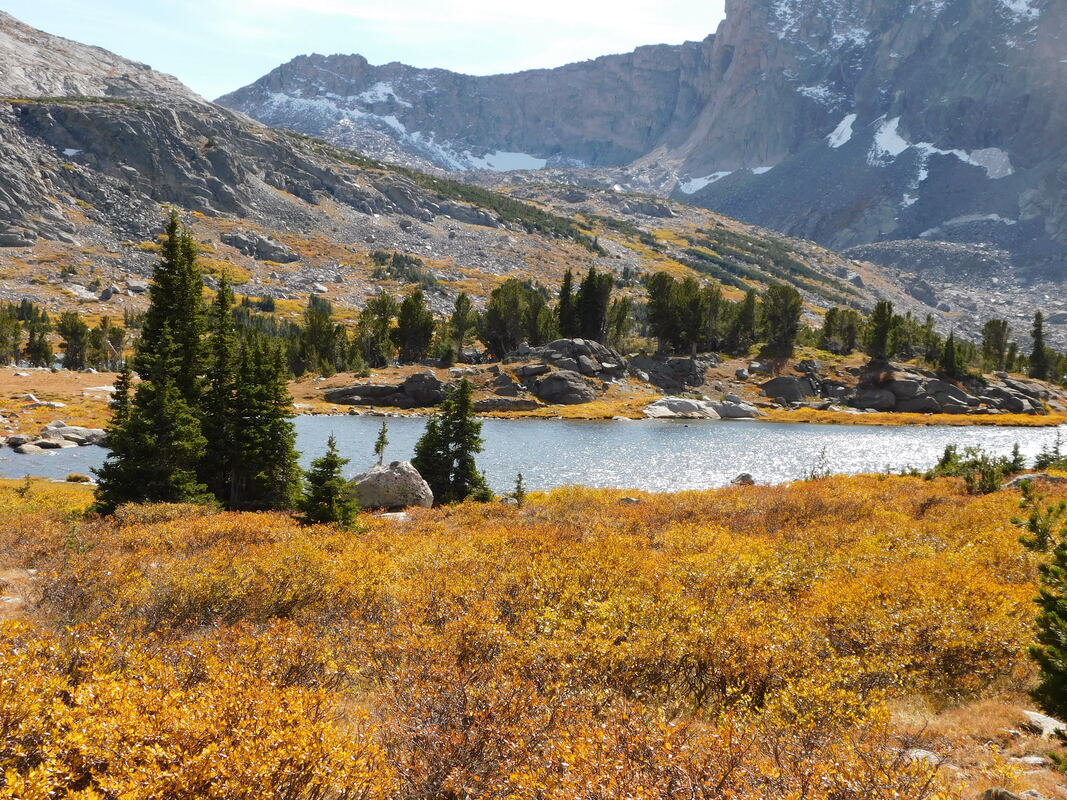 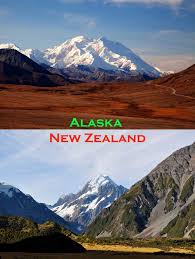 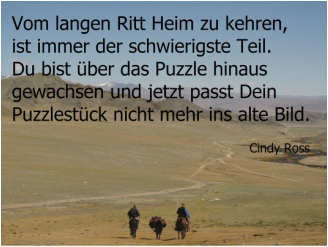 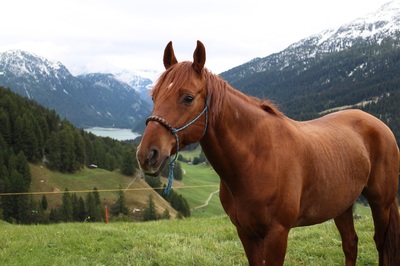 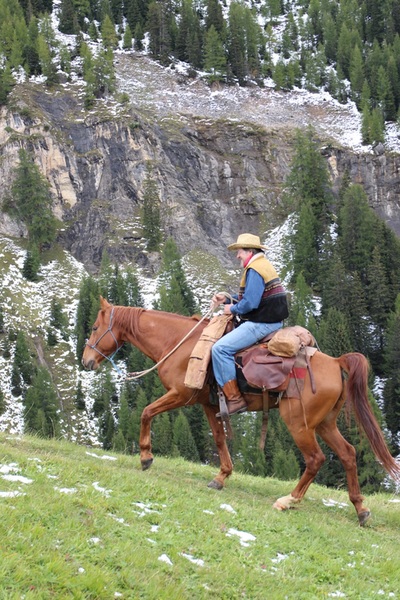 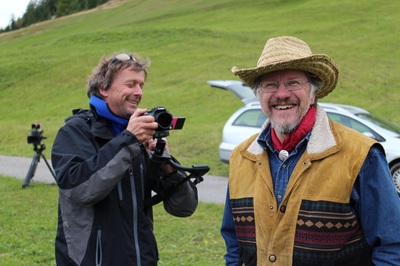 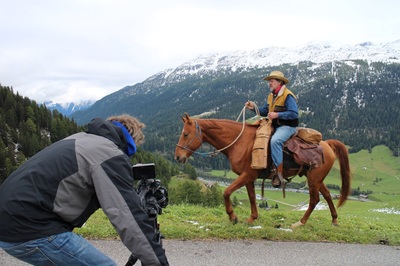 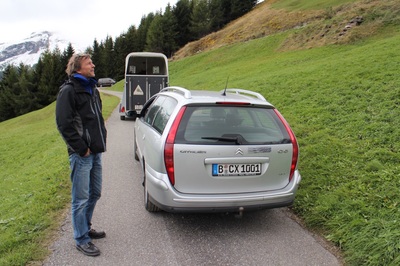 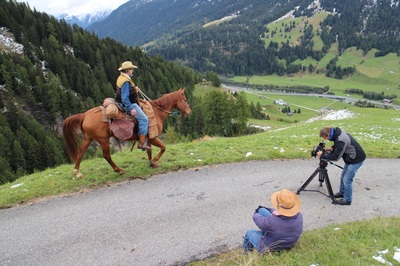